The Most Wonderful Day of the Year

So, I’m still recovering from the chart-breaking levels of incredibly cool that was Talk Like A Pirate Day! It really was an awesome experience, and everyone had so much fun with it. My costume was a huge hit! All of Youth Services was dressed in pirate garb, and I was shang-hai’d as soon as I got in to get my “pirate booty” from their treasure chest. I scored a skull-and-crossbones bandanna and a Jolly Roger temporary tattoo. 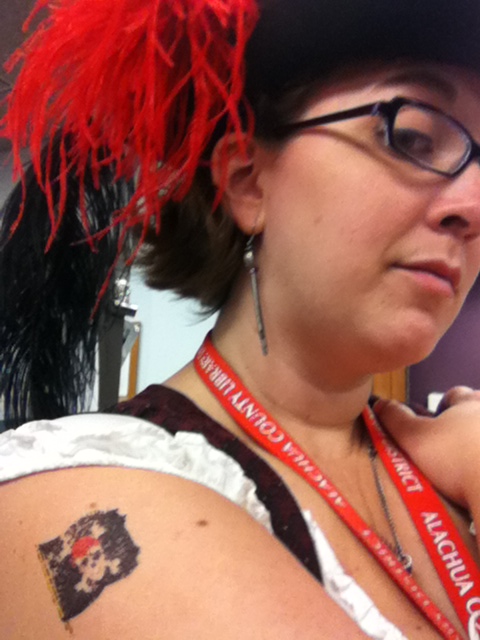 This is my sweet Jolly Roger tattoo. Be jealous.

Later, I picked up a couple of pirate rubber duckies, after I saw another kid with one and told KD in Youth Services that I would pay good money for them. She just let me have them! They are especially great because my bathroom at home is decorated with rubber duckies. One came home with me, and the other sits on my desk here at the library.

Moments of Cute and Weird, But Funny:

I had a bunch of kids say “ARR, MATEY” to me, bedecked with eyepatches and bandannas, and they were all thrilled when I said “AVAST” back. One kid asked me why I had feathers on my hat, and I told him it was because I was the Captain of my pirate ship! He was very impressed. One adult patron asked me the name of my ship, and I replied with “The Magpie”. He then asked what year my ship sailed? I gave him a straight-faced answer of “1607.” He seemed to find that acceptable and moved on. Several people asked “why are you dressed like that?” Sometimes I answered truthfully. Sometimes I answered, “Dressed like what?” I also got to spend the day threatening patrons with walking the plank and being keelhauled unless they brought their books back on time, which is something I wish I could do all the time!

One of my coworkers told me that she heard an ad on the radio for free donuts for pirates from Krispy Kreme, so I stopped by on my lunch break. I walked in and the gentleman behind the counter just handed me a dozen donuts without uttering a word! I told him thanks and happy sailing, and brought back my prize to share with me librarrrry crew.

Of course, not everyone could enjoy the levity of Talk Like A Pirate Day. I had a couple patrons ask me why were celebrating criminals. I had another say that Krispy Kreme should be giving those donuts to homeless people instead of people dressed in costumes. To them I just shook my head, because they obviously don’t know how to have fun. On the other hand, one young man said I shivered his timbers! I told him to come see me at the medieval faire, where I am a performer in a singing group, and I would be able to respond to him then, since it wouldn’t be appropriate at the library. 😉

That evening, I went to my other singing group rehearsal, and as soon as I arrived, the others decided they should dress as pirates too! We had a pirate-y practice, then I took one of my mateys and we went to get MORE donuts. I took these to my favorite venue, which was having a fundraiser, and the donuts and I were welcomed with open arms. Nothing like attending a dance party dressed as a pirate!

Anyway, this year’s Talk Like A Pirate Day was beyond compare, and I’m so glad I got to share it with everyone at my favorite place.

The Bookaneer in her natural habitat!

Filed under At the Library

One response to “The Most Wonderful Day of the Year”