This past weekend was Labor Day, where we honor the hard workers everywhere by not working at all! I was lucky enough to get a three-day weekend (thanks, government job with union benefits!) and traveled with my dad to the northern part of the South for a good old-fashioned family reunion.

We left Saturday morning, and headed toward Norfolk, Virginia for our first stop at my dad’s aunt and uncle’s house. I slept a lot of the way up, including when we passed “South of the Border”, a tourist attraction between South and North Carolina. We’ve never stopped there, but the billboards for it start about 160 miles south, and have silly sayings like “You never sausage a place! (You’re always a wiener at Pedro’s!)” Most of our trip consisted of singing loudly to the radio and jamming with air instruments, telling each other bad jokes, and reading the weird billboards.

Around 3:30pm, we “tuned in” to the Florida football game via the ESPN gamecast feature on dad’s smartphone. I get my passion for Florida sports mostly from my dad (he is also an alum) and I was in charge of reporting the play-by-play as he drove. There were a lot of agonizing moments as we waited for the page to refresh (not much 3G in the wilderness of North Carolina) and we made it to Virginia just in time to catch the fourth quarter. Aunt J watched us in amazement as we alternated between cheers and despair as the game ended and Florida squeaked out a win. Then we had a delicious dinner of chicken penne with veggies and watched more football until it was time for bed. In the morning we went for a run, and then out to brunch with Aunt J and Uncle G, and J’s daughter T and her husband C. Tragically, I left my beloved firm pillow at Aunt J’s, and it was not discovered missing until we were well on the way to North Carolina and the big reunion party. She did say she will mail it to me, for which I am eternally grateful! Thanks, Aunt J!

Sunday was the day of the reunion. We headed down into North Carolina and the Currituck Sound, to a house on the water that’s called “The Cottage”.

A map of where we were, complete with “You Are Here” sticker.

I haven’t been to visit this side of my family in about 14 years, and many I had never met, so I was a little nervous. However, everyone was incredibly welcoming and we all had a really great time telling stories, looking at old photos, eating awesome food and swimming and boating in the sound. Aunt B told me that she reads my blog and thinks it’s funny (Hi, B!) and my second cousin (?) M may come down for the 5K I’m running in November! I also bonded with some of the younger generation there, though we couldn’t quite figure out how we were related. We settled on the idea that I am their cousin-aunt and they are my cousin-nieces, because they are my father’s cousin’s daughter’s step-daughters. (confusing!) There were about fifty people in all, and we got a lot of photos that I can’t wait to see. Dad and I were the only ones there from our branch of the family, so we hammed it up a bit and took some silly pictures.

We stayed that night at the Cottage, then in the morning had a truly outstanding breakfast of homemade biscuits with sausage gravy and strawberry preserves. Then we hit the road to drive back to Florida.

On the way back I fell asleep again for the middle of the trip, including the way back through South of the Border (someday, Pedro!). There were a few great highlights though, including passing by a high school in Camden County, NC, that has a sign on their football field that said “Welcome to the SWAMP” (A little taste of home!) The school’s mascot, however, was the Bruins? Dad and I then scared ourselves with the idea of swamp-bears. Horrifying. In Elizabeth City, NC, we passed a billboard for a pizza place called “Itza Boutza Pizza”, which Dad found a lot funnier than I did. Dad also kept trying to come up with alternate definitions for “bookaneer”, like “when you schedule time for someone to listen to you, you book-an-ear”. Very funny, Dad. *eye-roll* I told him my favorite pirate joke: “What’s a pirate’s favorite movie rating? PG Thirrrteeeen” (Thanks for that goes to my old friend RO) I’ve got jokes too!

The trip was very relaxing, and it was nice to get away from the internet for a few days (though I did miss you, bookaneers!) Of course, getting back into the swing of things at the library today was lots of fun, since we were closed for Labor Day we had what seemed like three times the usual number of book drops and returns. It was a madhouse all day and the afternoon flew by. My favorite kind of day at the library!

Next time: bizarre tales, as promised, as well as some cute. Now I will leave you with an awesome picture of a beautiful place. 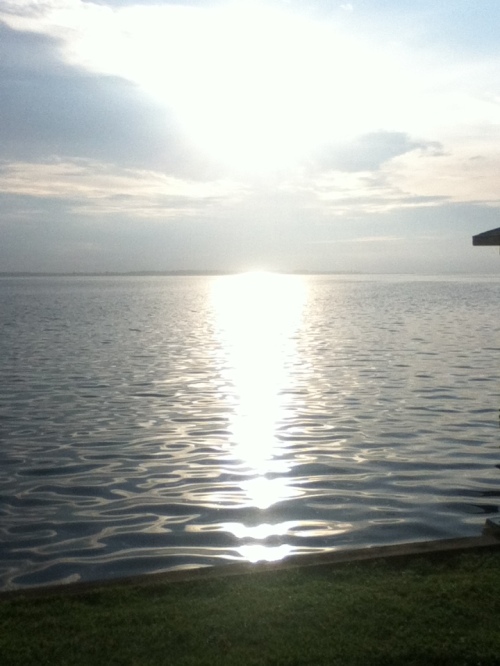 Sunrise over the Currituck Sound. Gorgeous.

Filed under Outside the Library

2 responses to “Even Pirates Need Vacations”